If you think the beauty of Mysore is restricted to magnificent palaces and other majestic buildings, then you probably have not heard of Brindavan Gardens, Mysore Zoo, Chamundi Hills, or Karanji Lake. These spectacular places, including a few sprawling gardens, and some stunning waterfalls & lakes, makes Mysore, one of the best tourist destinations in Karnataka. Mysore, which is also known as the cultural capital of Karnataka, is home to many opulent and royal palaces. It has several yoga centres and lush green sandalwood forests, that gave this city names like 'City of Palaces', 'Sandalwood City', and 'City of Yoga.'

Recently the city was declared the 'second cleanest city' in India by the Union Urban Development Authority. This makes it one of the most sought-after tourist destinations in Karnataka, visited by a large number of tourists every year. The rich cultural heritage and historical significance of this glorious city attracts tourists from around the world, who explore the splendor of Mysore city that includes prehistoric sites, palaces, monuments, temples, churches, zoo, sandalwood forests and well-manicured gardens.

The cosmopolitan nature of the city and its affluent standard of living further adds beauty to Mysore, which consists people of all religion and facets of life. With several options open for tourists, the city plays a host to travelers throughout the year, inviting them to visit places like Mysore Zoo, Mysore Palace, Brindavan Gardens, Chamundi Hills, Karanji Lake, etc. Mysore city was once the capital of Karnataka and so, it has a lot of historic buildings, monuments and sites, that are now developed into museums, library, and gardens.

To create a beautiful memory of your trip, you must plan your vacations to this fascinating city now! Here are some of the best places to visit in Mysore that captures the true beauty of Karnataka and makes it a must visit destination in India.

Also, known as the Mysore Maharaja Palace, this royal building is among the largest palaces in India, built in the year 1897, using wood. The palace is built in Indo Saracenic style with intricate craftsmanship, which looks stunning both during day time and in the evening, when the entire palace is illuminated with 98000 bulbs. This palace was once the abode of the royal family of the Wodayars.

This beautiful garden is spread over an area of approximately 150 acres and is situated below the Krishna Raja Sagara Dam. It was constructed in the year 1932 with a botanical park and several musical fountains that are created in different shapes and designs. These colorful fountains are major attractions here.

This popular zoo is originally named as Shri Chamarajendra Zoological Gardens, which houses a wide range of animals and birds from around the world. This zoo was constructed in the year 1892 and it is among the oldest zoos in India.

Karanji lake is one of the most important tourist destinations in Mysore, visited by a large number of tourists every day. It is spread over an area of 90 acres and is located in the foothills of Chamundi mountains, right behind the Mysore Zoo. A lot of migratory birds can be spotted nearby this area.

Another prominent attraction of Mysore, the Chamundi Hills can be viewed from any corner of the city. It has a beautiful Chamundeshwari Temple, positioned on the top of the hill, which is of great significance for the locals. The temple belongs to the 11th century and is dedicated to the ancestral goddess of the Mysore royal family. 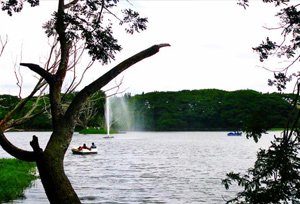 This stunning waterfall is one among the most beautiful waterfalls in India, which offers a spectacular view of Shivanasamudra, around 85 kms away from Mysore. Do you want to be a part of colorful fairs and festivals in Mysore? If yes, you can visit this dazzling city during Ugadi or Dasara festival to be a part of the much awaited celebration that takes place every year in Mysore. These festivals and other cultural events represent the traditional legacy of previous time; where people participate in these events with complete devotion and belief. Some of the popular festivals that take place in the Mysore city are Dasara festival, Vairamudi festival, Ugadi festival, and Dusshera.

By Air: Take a direct flight to Bangalore International Airport from any major cities like Hyderabad, Delhi, Chennai, and book a cab or board a bus to reach Mysore, around 139 km from Bangalore.

By Rail: Best way to reach Mysore is via rail that connects it with a number of cities including Bengaluru, Chennai, Hyderabad, etc. Mysore Junction is the nearest railway station, which offers regular train service.

By Road: Mysore is well-connected to Bengaluru and other nearby cities through Karnataka Road Transport Corporation, which offers regular bus services to Mysore.

Best Time To Visit: Throughout the year